Read this article - not just an expansion of concealed carry but MANY valuable improvements, including recognition of all valid out-of-state permits! Kentucky residents will be able to carry there as soon as the law goes into effect - great news!
NRA-ILA - Iowa’s Governor Signs Shall-Issue Bill Into Law
Posted by Chaz at 10:51 PM No comments:

Newsletters have been mailed so get your RSVP in now

The spring issue of the KC3 newsletter has been mailed and you should be receiving it soon.
If you plan to attend the annual meeting, please cut out or copy the RSVP form in this issue and mail it in to us ASAP so we can make order food and supplies for the meeting.
We look forward to seeing you there!
Posted by Chaz at 4:17 PM No comments:

The Second Amendment march in Frankfort

A fairly balanced report on the event, despite their insistence on photographing only the militia members -
State-Journal.com - 400 gun-lovers rally for rights at the Capitol

Posted using ShareThis
Posted by Chaz at 4:06 PM No comments:

KC3 at the Second Amendment rally in March in Frankfort 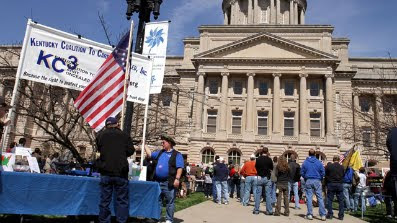 Posted using ShareThis
Posted by Chaz at 1:52 PM No comments:

Posted using ShareThis
Posted by Chaz at 12:08 PM No comments:

Posted using ShareThis
Posted by Chaz at 11:29 AM No comments:

The KC3 annual meeting is going to be held May 15th at the Open Range in Crestwood, Ky., the same location we've used the last two years.
Just like last year, we're requiring that those who wish to attend make reservations so we'll have an exact count for planning purposes. The information on how to do that will be in the issue of hte newsletter that's being mailed at the end of this week, and will also be posted here on the blog.
We're going to have another raffle, and hope to be giving away various other items of interest to our members.
If you're not a member, now's the time to join up, and if you are a member of KC3 please try to make it for the meeting. It's YOUR organization and we need YOUR help to keep it going and growing!
Posted by Chaz at 3:56 PM No comments:

Posted using ShareThis
Posted by Chaz at 8:36 AM No comments:

NRA-ILA :: Progress Made On Military Once-Fired Brass Issue—ATK Stops Scrapping Cartridge Cases
Posted by Chaz at 1:49 AM No comments:

NRA-ILA :: Campus Carry Regains Momentum in Colorado
Posted by Chaz at 1:48 AM No comments:

Court: University Of Colorado Must Allow Guns On Campus

Court: University Of Colorado Must Allow Guns On Campus
Posted by Chaz at 12:04 PM No comments:

Legal concealed weapon ruins robbery try - FOX19.com and FOX19 News, weather, traffic, and sports for Cincinnati and Northern Kentucky |
Posted by Chaz at 10:29 AM No comments:

House Bill 542, introduced by State Representative Terry Mills (D-24), passed the House by a vote of 96-2 on Thursday, March 18. It is now in the Senate State and Local Government Committee.

This bill would direct the Department of Fish and Wildlife Resources to include a voter registration application form as part of an application for a hunting license or permit. In addition, HB542 would also provide that any change of address form submitted for purposes of a hunting license or permit would serve as a change of address for voter registration. Hunter-Voter legislation will encourage sportsmen’s involvement in the political process and is an important method for preserving Kentucky’s outdoor heritage.

House Bill 453 passed the State House on Tuesday, March 16 by a vote of 92-4. It is now in the Senate Judiciary Committee.

Authored by State Representative Will Coursey (D-6), HB453 would allow an individual to carry a loaded or unloaded firearm in an enclosed compartment originally installed by the manufacturer in a motor vehicle. The firearm would not be considered a concealed firearm under state law.

Both HB542 and HB453 are stuck in their respective committees. Because of budget talks during the final week of regular session, it looks like these bills may not be addressed. Please contact Senate leadership TODAY and ask them to consider HB542 and HB453 during the veto override session. Contact information is listed below.

Find out who your Kentucky Legislators are HERE, and email them from HERE.

· SECTION 225 - Armed men not to be brought into State

· SECTION 239 - Duels and public office do NOT mix

Special consideration for our service personnel deployed outside the U.S. They get the renewal date extended 90 days from their date of return for most ANY license they hold, including a CCDWL.

We call this statute our "Preemption law". With very limited exceptions regarding CCDW, KY firearms laws are the same statewide. Note KRS 237.115 for one exception.

CHAPTER 237 - FIREARMS AND DESTRUCTIVE DEVICES
This entire chapter is devoted to firearms and other destructive devices, you may want to pay special attention to the following sections:

· 237.070 Prohibition against sale or transfer of firearm to convicted felon.

· 237.104 Rights to acquire, carry, and use deadly weapons not to be impaired during disaster or emergency

· 237.106 Right of employees and other persons to possess firearms in vehicle -- Employer liable for denying right

This includes anyone who acts as a second and those who carry or deliver the challenge.

Here you will find the meanings of specific terms found throughout the other statues including "deadly weapon", "possession", "physical injury" and "serious physical injury".

This chapter deals mostly with victimless crimes involving firearms. They have, for the most part, been enacted to prevent what one might do with a firearm in his possession rather than any actual perpetration of otherwise criminal activity. You should pay close attention to the wording in the chapter, some crimes described seem rather vague and open to very loose interpretation. The entire chapter is relevant but you should be especially wary of the crimes described in the following sections:

This chapter is devoted to the definitions of justifiable force and deadly force. Anyone who carries a weapon for self-defense would benefit from a detailed study of this chapter, paying close attention to the differences between the following sections: